Now, if you haven’t been living under a rock, you will be familiar with Oculus Quest. However, if you are new here, let me give you a brief introduction. Oculus Quest has in many ways revolutionized the field of wireless VR. It has brought new and fun experiences for enthusiasts as well as open up new opportunities for developers. This entirely new immersive gaming experience captivates users around the globe. 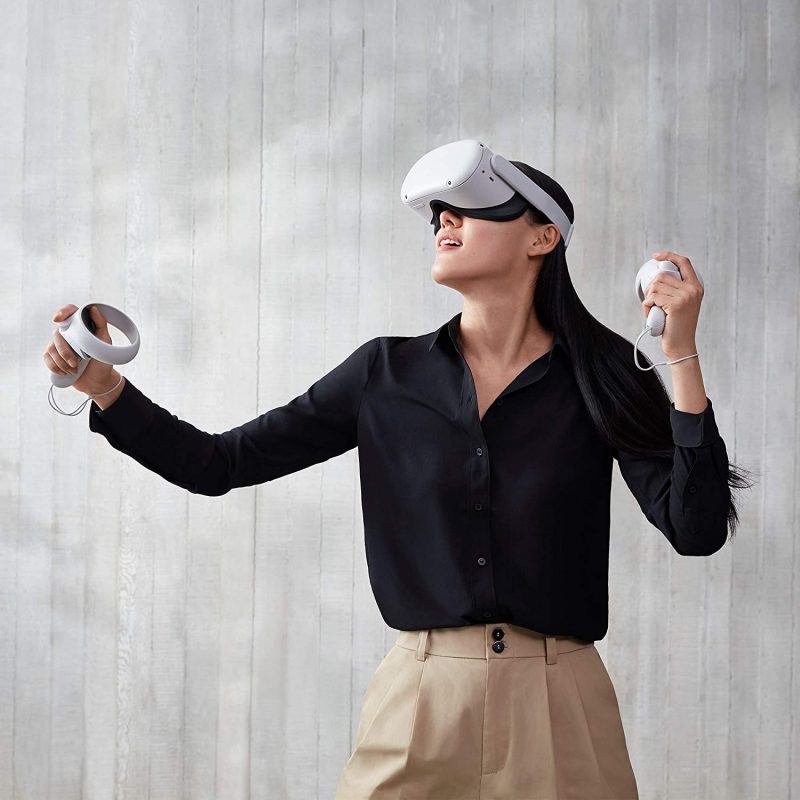 With the new launch of Oculus Quest 2 review, technology has taken another leap in the world of VR. This next-generation all in one VR set is modified in terms of design features and resolution display. It offers all in one form factor, the latest Touch controllers, and the best high-resolution display.

The price tag is also USD 100 lesser than the original. With the added features, people will be flocking to get their hands on this device. Preorders for the Oculus Quest 2 have opened and will start their shipping procedure from October 13.

The reason behind Oculus Quest 2

Quest 2 has all the essential requirements to power all the new VR games and experiences’ new features. The first headset was a major success. However, the speculations around the second headset grew. As many people suggested, an all-in-one form factor was introduced, which would be controlled using Oculus Insight Tracking System.

Now, with the new and upgraded Quest 2, things are going even further. It begins with the new leap in processing power thanks to the Qualcomm Snapdragon XR2 Platform, which offers high AI proficiency and 6GB of RAM.

That’s not all. The new display features 1832 x 1920 pixels per eye- which will be the highest resolution display yet. With the introduction of 50% more pixels than the original Quest, all the games ranging from multiplayer to productivity apps will look even more realistic than ever. This won’t be all, as with increased resolution power, the also increased graphic processing power.

This new display will be capable of 90 Hz. Thus, you will run the system, applications at around 90 Hz on day one, which will include the Home Environment, Store, and even Oculus TV by utilizing the Experimental Features. 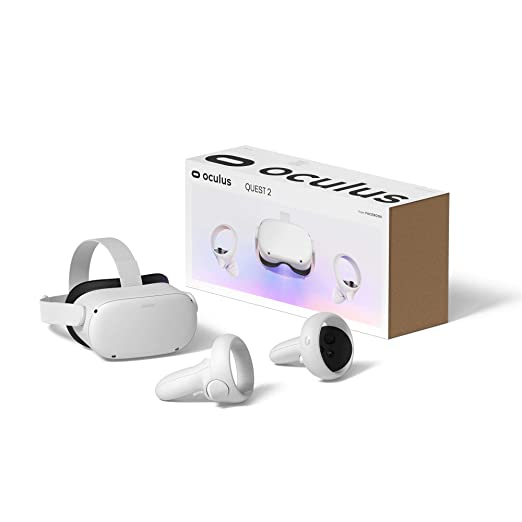 As the Oculus 2 has come out at the time of the coronavirus pandemic, people are already not leaving their houses. Therefore, this will be the perfect escape into another reality, where you can explore whatever your heart desires. As it is a standalone headset, VR is making a comeback to help people escape.

The Quest 2 has come with a more intuitive and slicker design as well as improved performance and highly modified its display resolution.

The new and improved Oculus Quest 2 was released on October 13 and started at the price of $299 for the 64GB model. You can splurge around $399 for more storage, around 256 GB. The Quest 2 can be obtained directly through the Oculus Website; however, you can even go to Amazon, Best Buy, and GameStop to obtain this VR headset. But due to high demand, it is sold out across the majority of the United States.

Next up in our Oculus Quest 2 review are the design features and comfort. This new product has a very modern and sleek outer look, making it look even more futuristic. Removing the plain black its predecessor came out with, it has reduced weight around 10% lighter. The light gray design is then highlighted by the black face strap with the addition of a quartet of camera sensors, making it look like a simple design, which makes it aesthetically pleasing and inviting.

The position of the buttons and port layout is cohesive and helps in maintaining its seamless design. On the right side of the headset, a power button will be located. A volume rocker is also placed on the right underside. The USB-C port and the headphone jack are located on the left for charging as well as audio.

The lens spacing is also given into the consumer’s hand, as you can change the viewing settings by pinching them or even spreading them out manually right from the inside of the headset. This will eliminate the need for the switch, which was located at the bottom portion of the Original Quest.

Oculus Quest 2 comes in a compact size of 7.5 x 4 x 5.2 inches and weighs 1.1 pounds. Therefore, it is lightweight in addition to be comfortable. It will not weigh you down even when you spend more than an hour on the VR. The ample amount of foam padding will contribute to its comfort. The adjustable elastic bands will allow you to fit the perfect fit for your head. You must make sure that the strap is not too tight, or you might finish gaming with a large indent in your forehead.

Oculus Quest 2 is an all in one VR system. Thus you don’t need any external sensors or cameras. You will have everything you need once you buy this headset. Setting up this device will only take a few moments.

To begin, you will need to put the headset on and activate your account using the Oculus mobile app. Once activated, you will establish your play area, and then you will be good to go. Oculus Quest 2 uses Oculus’ Guardian system, enabling you to draw out a playing space using the Oculus Touch controllers. This will avoid bumping into objects.

This action of creating guardian space is as simple as painting in the room. You can even see your living room pass through the Pass-through + cameras. This mode was specifically designed to reduce the problem of depth disparity found in other pass-through cameras. These cameras do well to match up with your current surroundings. However, if you leave your Guardia bounder, the headset will automatically switch to Pass-through mode. The pass-through mode will enable you to see the real like surroundings you are coming in contact with.

The Oculus Quest also enables you to switch to the Pass-through feature with the quick tap on the headset side, which is a great option if you want to look at what the real world is doing from time to time. Oculus recommends having a 6.5 x 6.5-foot space for VR for room-scale, as it will allow you to have a stable space for more active experiences in which you will be able to walk around. But when if you don’t have a ton of space. You can use the Oculus Quest 2 while sitting or standing.

Oculus Quest 2 has new modifications, such as the Oculus Touch Controllers, which help deliver better gesture tracking. The setting up procedure is still the same as previously, the scoop-shaped controllers feature two shoulder buttons for performing actions like firing weapons and grabbing objects, with clickable analog sticks as well as a pair of face buttons on each controller. In terms of Oculus Quest accessories, you can invest in wrist straps so that your controls don’t go flying when you’re in an intense fight.

The Oculus controllers are designed to provide comfort and ease to be used across a diverse range of games and experiences. The triggers are quick in detecting motion, allowing you to get easy headshots in a fighting game. These controllers’ haptic sensation is also impressive, as they allow you to feel the distinct buzzing in any game. Only a handful of Quest apps support hand tracking at the moment. However, the feature needs to be improved upon, as it is a bit wonky when used.

A great number of games are lined up to be behind Oculus Quest. The games such as Beat Saber and the completely engulfing shooting of super-hot VR. It makes you feel as if you’re in a sci-fi action movie, as you will be able to defy science and time. Other important games include Star Wars, Pistol Whip, and even Tetris effect. Due to the amazing graphics and 3D environment modeling, the experience level is heightened.

In addition to single-player games, it also supports multiplayer games, allowing you to play alongside friends, making the lockdown experience just a little better. Beating up bad guys in a game such as Path of Warrior is made even better when you have a friend alongside.

You can further improve your gaming experience with the $79 Oculus Link cable, which will allow you to connect your Quest to a VR-compatible PC. By doing this, you can even play a larger range of VR games such as Half-life: Alyx, Star Wars Squadron, and Fallout 4 VR. You might not be able to get all your favorite games on VR, but the Oculus Link will let you turn your Quest into an Oculus Rift for a little less than the Rift's actual price of $399.

Even though some modifications were made to the first Oculus VR release, some factors, such as the great sound system was kept the same. The battery life ranges from 2 to 3 hours. After an hour of playing games, around 50% of the battery is drained.

The Oculus Quest 2 review is just about to end; however, I would like to say that it just works like magic as it's as revolutionary as the Nintendo Switch or iPhone. Just like its senior, Quest 2 has made its name in the Virtual Reality world and got rid of needing a really powerful PC or a ton of wires and sensors, but gives you the experience of a lifetime.

The new headset does have improved features, but if you already own an Oculus Quest you might not want to spend another $299.  However, the Oculus Quest 2’s price, game library, and the extreme comfort it does might make you drop the cash- it is the perfect escape from the dreary reality we currently live in. And there you have it, a complete Buyer's review on the Oculus 2. We would highly recommend it as it does live up to its price point.