Best Accessories for Oculus Quest in 2021

VR started off as a gimmick on mobile phones destined to be a phase that would pass due to a lack of developer support and insufficient user interest. And on mobile phones, it did. Seeing as Samsung was the only smartphone manufacturer that managed to effectively incorporate VR into phones, it is not a surprise that mobile phone VR failed to leave a lasting impact. 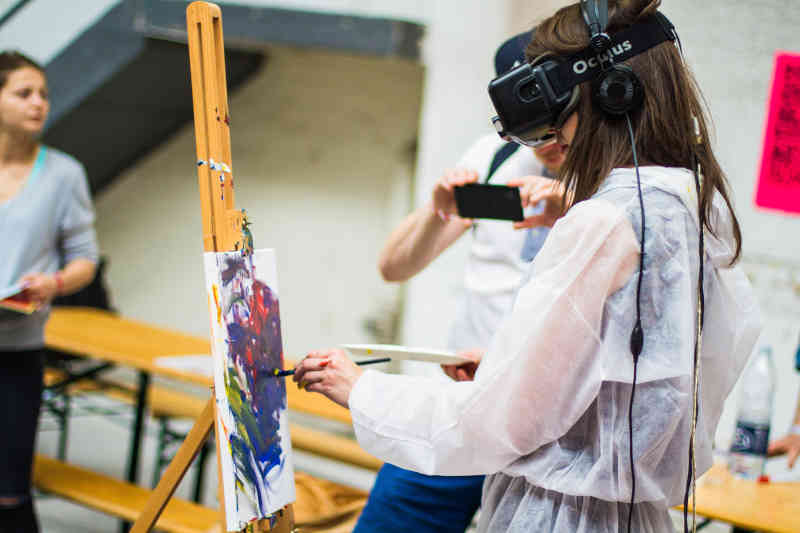 Where smartphone VR failed, a small independent company succeeded. Oculus, formerly Oculus VR, initiated a crowdfunding campaign for its Rift VR headset protype for PCs in 2012. The campaign garnered so much attention that it exceeded its funding goal, raising a total of $2.4 million. Backed by the power of a PC, Rift promised an immersive experience that would open a world of possibilities for developers to explore.

Here’s a look at the Best Accessories for Oculus Quest that you can buy in 2021.

Despite its popularity among users and developers, Oculus Rift failed to cultivate a large userbase. This was in part due to its high price tag and the need for additional hardware that does not come cheap either. If someone did purchase an Oculus Rift VR headset, they would also need to have a powerful processor and a powerful GPU for the technology to be useable.

This limitation deterred the average user from exploring Oculus VR. This was an issue that Facebook Inc., having acquired Oculus three years prior, intended to address with the release of its Oculus Go headset. Oculus Go gave users a taste of VR at an affordable price but with much limited options in terms of supported applications and games. It was a standalone headset that offered a selection of less GPU-intensive titles designed for mobile hardware.

The Oculus Quest headset succeeds the Oculus Go with powerful hardware, better controls and a much larger library of supported titles. The VR headset comes with 6DOF position tracking and integrates Oculus Rift’s remarkable touch controls. Being standalone, it comes fitted with all the computing hardware, much like its predecessor, but this time the hardware packs more of a punch. However, the headset does not support PC-only applications and AAA titles out of the box.

Unlike the Oculus Rift, standalone models like the Go and Quest offer greater portability with their cord-free design, albeit at the cost of performance. Both devices work well enough, however, with especially designed applications and games. More powerful hardware and a larger selection of supported titles make Quest the natural successor to Oculus Go.

The Oculus Quest headset comes with two touch controllers, a spacer, a power adaptor and a pack of AA batteries that power the controllers. The Quest has been marketed as a next-generation gaming console and is certainly sold at the price of one, despite its much-limited support for titles as compared to conventional gaming consoles. It comes in two variants: 64 GB and 128 GB.

Since it is a standalone headset, it means limited support for accessories unlike its more powerful older brother, the Rift. However, there is still quite a selection of accessories you can pair the device with to enhance the user experience. We surveyed the market and picked out the best Accessories for Oculus Quest you can get to enhance your VR experience. 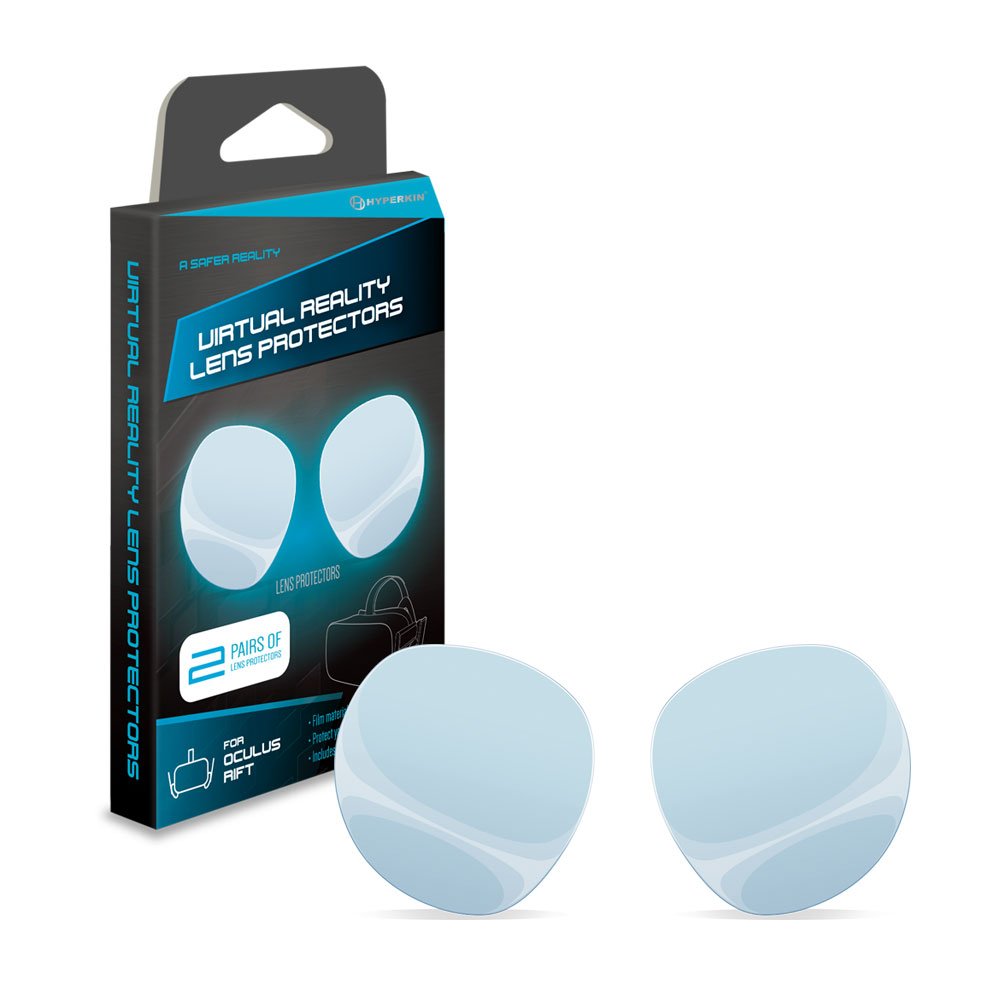 Any VR headset is essentially a collection of lenses. The longer the lenses last, the more usage you can get from the headset. If you are new to VR headsets, it is easy to ignore the lenses and write them off as inessential components not requiring much care. However, making this mistake might leave you regretting your carelessness when the lenses get scratched, deteriorating the quality of your experience.

The lens protectors work much like a smartphone screen protector. They are especially designed to fit Oculus Quest’s curved lenses, protecting them from scratches caused by dirt particles. The lens protectors feature a hook design that is extended to make it easy to peel off.

Applying the lens protectors will not compromise the image quality either. The Oculus Quest lens covers do not reduce light transference, which means you will get the same sharp image quality that the Quest boasts. In fact, some users have claimed that applying the lens covers made the image even sharper, allowing for a more immersive experience.
(See Oculus cleaning tips here.) 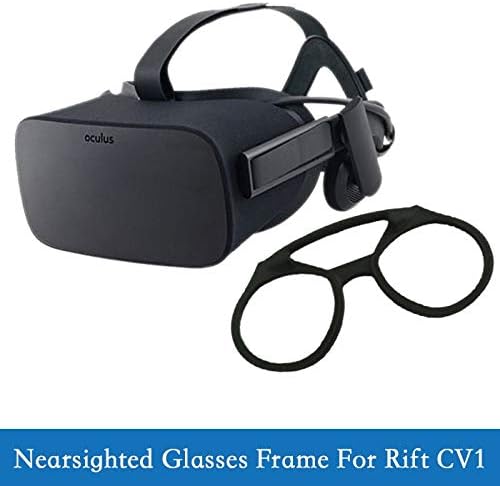 The Oculus Quest presents a solution in the form of an add-on accessory. The eyeglass frames are designed to be compatible with almost all types of glasses. You can either get prescription glasses made or use the ones you already have. What is special about these eyeglass frames is that they are magnetic. Once you fit them with the prescription glasses, you can magnetically attach them to the Quest.

Once attached, you would be hard put to tell whether they are a part of the headset’s design or an add-on accessory. They are also pretty out of the way once attached, and you will hardly notice them during use. They will make a massive positive difference to your gameplay experience.

The eyeglass frames are easy to attach and easy to remove, and the whole process takes less than 3 seconds. 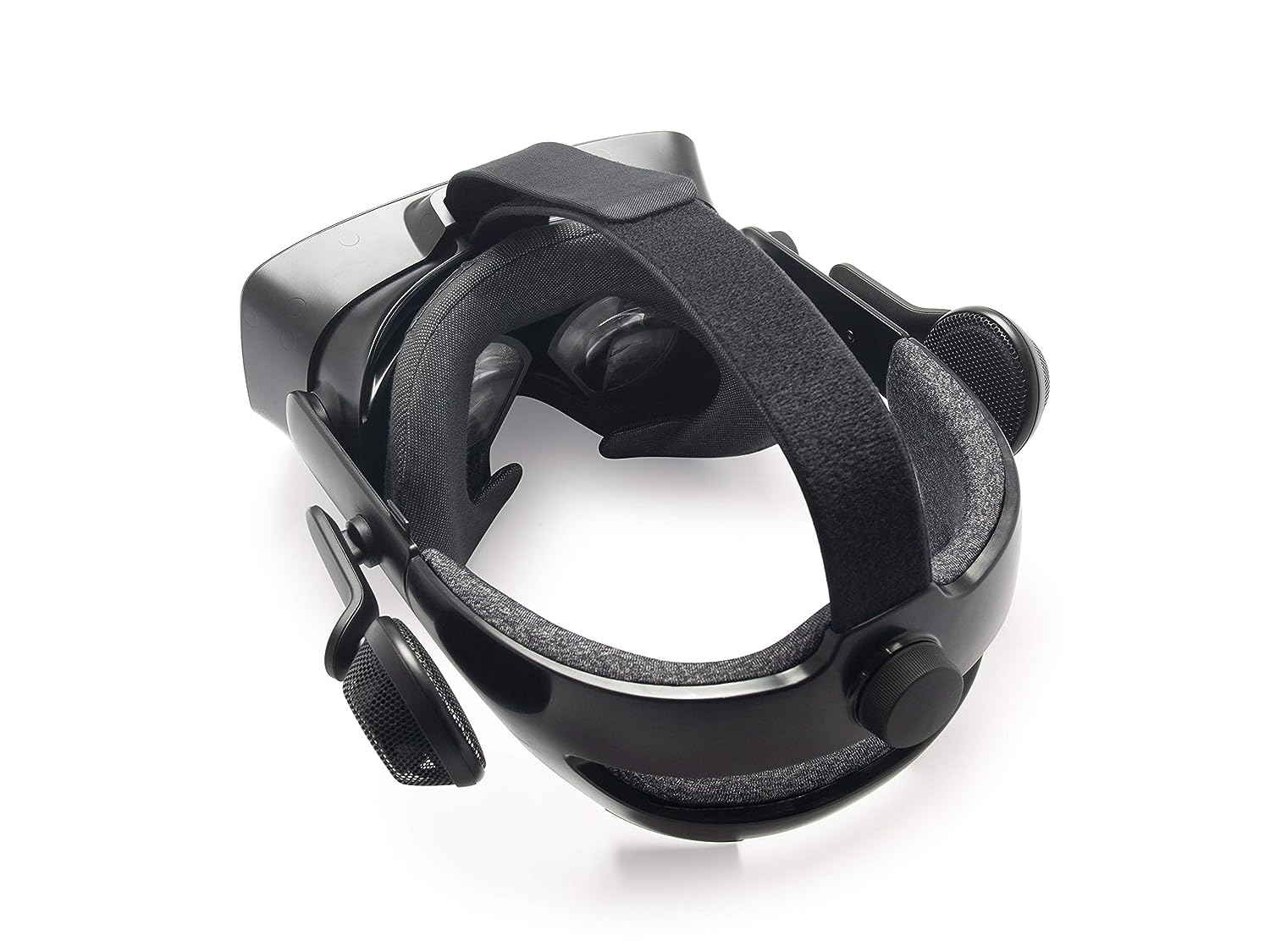 If you have used VR headsets before, you probably would have encountered one common issue. With extended usage, you are bound to get sweaty. All this moisture combined with dirt and bacteria gets absorbed into the headset’s foam face gasket.

The face gasket is designed to block your peripheral vision as well as external light. It is an essential component of the VR headset, but it can also cause the most nuisance over time. Due to sweat absorption, the gasket may begin to smell after a while and may get harder, causing discomfort. If the gasket reaches this position, the only solution is to replace it, which will cost you more than the alternative.

The solution is taking due care of the face gasket from the get-go. To this end, you can purchase an aftermarket cotton cover that fits perfectly onto the face gasket. There are a few of these on the market that do a good job, but one of the best ones is sold by VR Cover. The cotton cover makes use of elastic straps to stay in place once it has been applied to the face gasket.

The Face Gasket Protector package from VR Cover comes with two cotton covers, so you don’t have to put your fun on hold when one of them gets dirty. When it gets dirty, you can simply wash it and use the other one in the meanwhile. 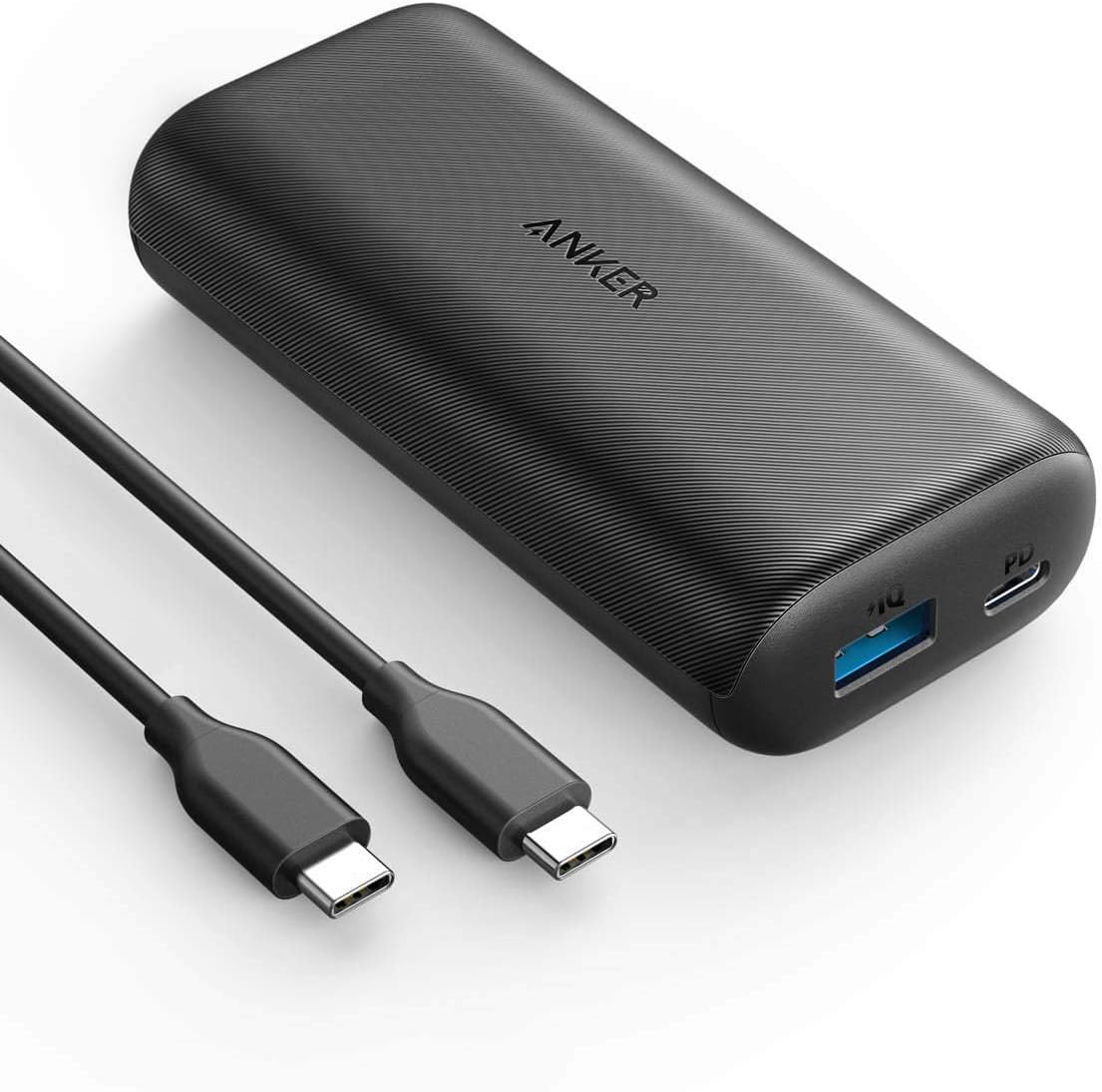 The Oculus Quest is not corded like the Rift, which means limited battery life. There is a high probability that your experience will eventually get interrupted because of the battery running out.

On average, the Quest will give you about 3 hours of playtime, which is almost long enough for you to watch a movie without having to recharge. Once you are done, you can put the Quest to recharge and have it ready for your next binge. However, if you are taking the headset with you on a journey, you would want some additional power.

The Quest features a USB-C charging port for faster charging. This also means that it is compatible with all the latest power banks with fast charging. Pairing the headset with a large power bank when the battery is depleted will give you a few additional hours of gameplay. Depending on the size and quality of the power bank used, you can effectively double or even triple your gameplay time.

Be sure to purchase a good battery pack, though, as not all deliver the same performance. It is advisable to invest a few extra bucks in a high-quality power bank as you will be using it to power a variety of other devices in addition to your headset. A good power bank is a power outlet on the go – the more powerful it is, the longer your devices will last. 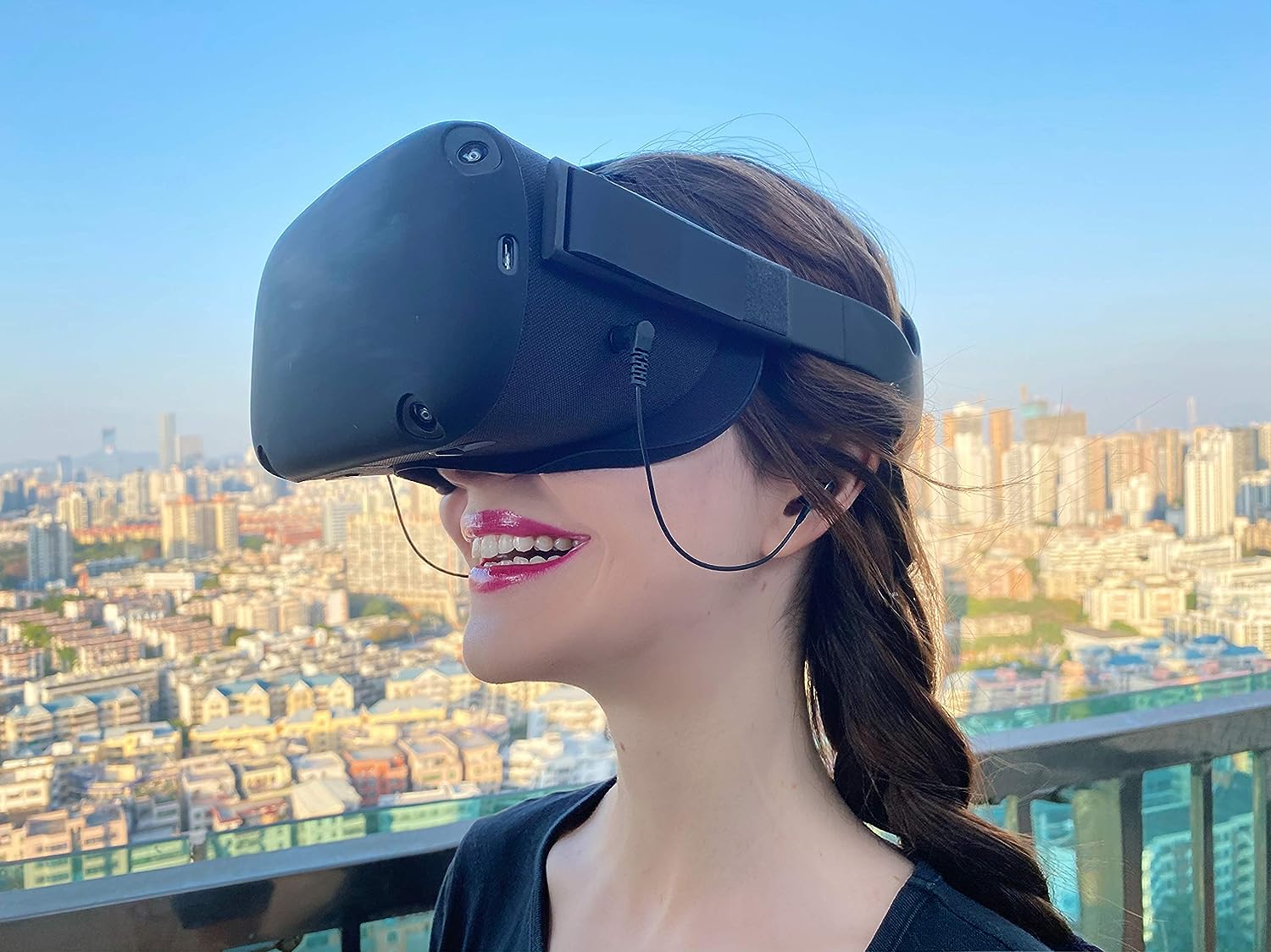 These earphones are an official accessory that can be purchased from Oculus. Although the Quest features built-in speakers, they affect the overall immersion. The in-ear headphones block outside noise, enhancing the VR experience and making it more immersive.

The Quest earphones are specifically designed at a custom length to avoid accidental pulling when used with the headset. They can be connected to the 3.5mm audio jack on the headset. 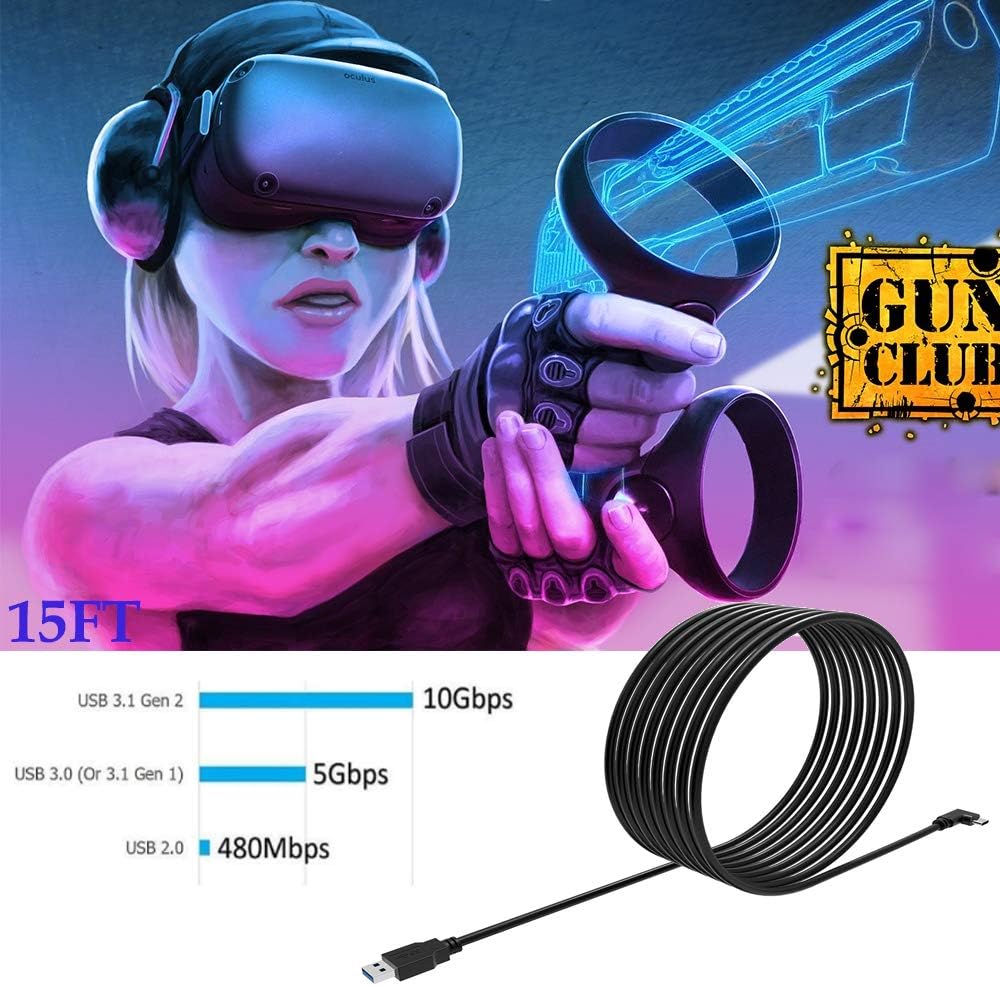 This is another official accessory from Oculus. It is a fiber optic cable designed to be used with the new Oculus Link feature. Through this feature, users can play PCVR games on their Oculus Quest standalone headset.

There are other aftermarket cables as well that can be used for this purpose. However, the Oculus Link cable is specifically designed to provide optimum quality and experience. Its 5-meter length also ensures that it can be easily connected to your PC without any pulling.

Oculus Link opens up a world of Oculus Rift titles for the Quest. Simply connecting the Quest to a gaming PC will allow users to experience dedicated PCVR games from the extensive Rift library. The cable reduces latency and enhances the gaming experience.

Once the Quest is connected to a gaming PC with the Link cable, the Oculus app can be used to play Rift titles on the Quest. Although there is no support to view and select Rift titles from within the headset, this doesn’t affect the experience to a great degree.

The Oculus Quest offers great balance between price and experience that the Rift lacked. With a selection of accessories, the headset opens up a world of new experiences at a considerably lower price than the Rift.

for best Accessories for Oculus Quest 2.