The Difference Between Augmented Reality and Virtual Reality in 2023 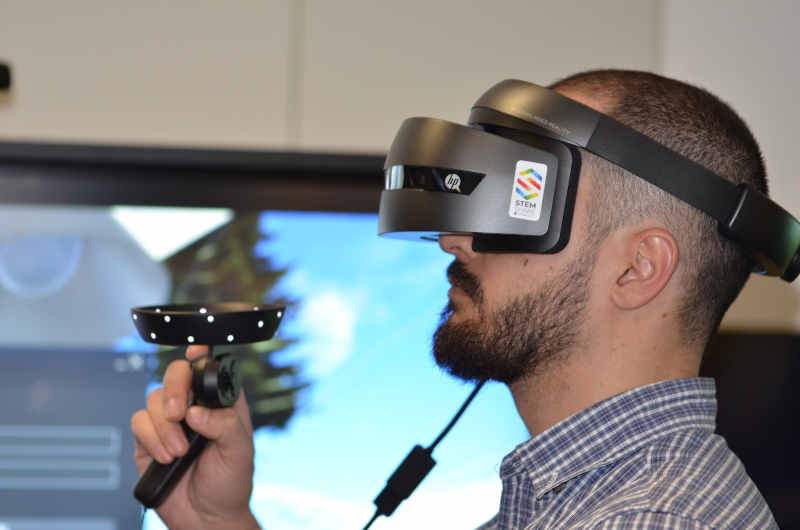 Technological advancements in our world today have added so much to the entertainment industry, especially the gaming sector. It is as a result of this development that we now hear about Augmented Reality and Virtual Reality. AR and VR have bridged the physical and digital worlds. They enable you to receive content and information visually, in the same way, you take in the real world.

Contents show
1 What is Virtual Reality
2 What is Augmented Reality
2.1 What Differentiates Augmented Reality and Virtual Reality
3 On the other hand, Virtual reality takes these same features to a more advanced level by producing an entirely computer-generated simulation of an alternate world. These immersive simulations can create almost any visual or imaginable place for the player using special equipment such as computers, headsets, gloves, and sensors.

The concept of both realities is to bring to life the imaginative worlds locked up in the human minds and make individuals interact fully with them. Most people are pretty much familiar with VR but still, get confused about the concept of AR. The two terms are often used while most people do not fully understand the concepts.

Perhaps it is because they are pretty similar and are often confused, so they can be tasking to differentiate. However, virtual reality is different from augmented reality, even though most people don't know this. The two concepts have features that distinguish them from each other when paid attention to.

What is Virtual Reality

VR headsets are very common these days and can be found in most game stores and centers. The concept of VR is a simple one that paints a picture of a different reality. In other words, when used, it entirely blocks your sight and, in exchange, transports you to somewhere else just by sight. It is a concept used to create or produce a different experience distinct from the real world. So when you use a VR headset, your physical surroundings become blocked out, leaving only the images in front which are programmed to appear authentic. At that moment, what you see becomes the reality you know.

Most VR headsets are opaque, implying that you cannot see through them. Thus, you are blinded to the things around you while the computer-generated world becomes your reality. So how then does the concept of virtual reality work, you might wonder. It's pretty simple when considered. The lenses of these headsets are completely dark, so you do not get to see anything when you wear them while they are switched off.

However, your vision is filled with whatever image or video generated when these headsets become functional, and this is the function of the panels located within the lenses. Usually, the displayed realities include a 3D game environment, a multi-dimensional video presentation, or a tour of a particular virtual environment. At this stage, you are visually transported to any destination being displayed as your new reality is now a virtual environment.

These headsets also use motion-tracking technology to increase the authenticity of the images and scenes being presented. The Playstation VR and Quest 2 are good examples. This technology is located in different forms depending on the brand and maker of the VR headset. In some headsets, it comes as external cameras, while other headsets have it as cameras that provide a view from an outward angle. With this feature, all the changes in positions and movements of the individual are captured regardless of the direction they are headed. This also adds more authenticity to the reality generated.

Some headsets also allow you to select a movement area or predetermined virtual space where you can freely move around without bumping into other things. This is quite helpful as VR is powerful enough to translate you to another reality different from the real world. However, the set area is often restricted to a certain length and breadth but is better than sticking to a specific position and spot.

Most VR headsets also come with motion controls that allow you to move within the VR while also providing virtual hands. So you can be more involved and not be watching reality alone; with the help of these devices, you can touch the things you are looking at. The concept of VR is not affected by your physical surroundings or environment as it takes you away from them, and this is very evident in VR games.

With VR headsets, your physical location or posture does not matter. Within the context of the app or video, you can be flying a plane or trekking through some distant jungle, and that is all that matters as long as your vision is occupied. Presently, there are numerous prospects in VR, one of which is its presentation in 4D. It is being developed as an upgraded form of VR, including natural effects like snow, rain, or wind. These effects would be generated by machines to match the reality being experienced in the virtual world.

What is Augmented Reality

While VR generates an artificial reality for you and then blocks off your physical environment, augmented reality, on the other hand, adds to it. It is an exciting concept in which computer graphics and images are generated to influence your experience of the natural world and make it more appealing. Most people often find this concept uninteresting, but when considered closely, it comes with several bonuses. Unlike VR headsets which can not be seen through and do not support sight, AR headsets are transparent, thus allowing you to see most things that are in front of you. They can be likened to transparent glasses that do not block out the rays of the sun.

With the concept of AR, there is no need for a physical monitor as the technology is built to support the free movement by users. In augmented reality, you are not entirely transported to a different reality as you can still view your physical surroundings. However, AR headsets do project computer graphics and images over your physical background.

This implies that while you are using an AR headset in your room, the view of your room will not be eliminated. Instead, the AR monitor would display the graphics and images you wish to see in such a way that the pictures and graphics hang in front of you. You can even make the display transparent such that you can see through it and view your physical surroundings.

AR technology allows you to move freely as there is restriction due to virtual space. It does not transport you from your physical location; it only adds to what you see. The technology has also been extended to smartphones with the development and release of apps that use your phone's camera and screen to display information generated by AR.

Presently, these apps on smartphones are more common and widely used when compared to other AR supported by devices. AR headsets can provide different displays, from a basic graphic outlook of time and weather to the projection of floating holograms.

Unlike virtual reality, augmented reality does not offer whole or total visual immersion as it does not replace your vision. With smartphones, the display of AR is often restricted to their screens, reducing your experience of augmented reality. Even with smart glasses like HoloLens, images being projected can only appear within a limited area which is often in front of the individual. It simply presents a clearer view of images and graphics while providing sight of your physical surroundings. AR technology also uses the 6DOF to function, especially AR apps on smartphones which utilize it for a constant and steady image projection.

To a large extent, augmented reality provides a more technical platform than virtual reality as it can be utilized in creating 3D models and design interfaces. This feature is usually beneficial to design teams and computer animators as it allows them to see from a deeper perspective. With its numerous possibilities, AR is arguably the future of the world's display system in the coming years. AR on smartphones has also been helpful in the recognition of surroundings and provision of useful data about relevant topics. The focus is on how well we can interpret and process the information supplied.

Even though their devices and technologies have similar designs and can be confused with each other, the two concepts are distinctly different. This is because they accomplish different things with different approaches and strategies. A very significant difference between the two is that VR imposes a new reality by blocking out your physical surroundings as transporting you to a different reality. In comparison, AR does not blind you from your physical area but influences its outlook by providing graphics and images over the background. The two concepts serve different purposes and offer unique experiences.

The focus of VR is to generate another reality and to present it as true, while AR tends to make you understand interfaces, applications and process information better. So the concept of VR is essentially developing to eventually replace reality in appearance and expression, while AR seeks to project information for quick understanding and easy interaction. Another distinguishing factor is that VR offers a more visual immersion option than AR as the former seeks to replace reality. The concept of VR is to isolate your vision and present imagery you cannot help but believe and accept, quite unlike AR.

The difference between AR and VR is concluded based on devices and experience they require;

Both Augmented reality and Virtual reality have promising potential in the future of gaming,  education, e-commerce, marketing, and many other sectors. Both technologies have the experiences that bring together the real world and a virtual world with improved 3-D visuals. However, it's easy to mix up the two, there are some significant differences, as mentioned in this article.

Almost anyone can access augmented reality with a smartphone, making it more efficient branding and gaming tools than VR.  AR turns the physical world into a colorful visual world by projecting virtual characters and pictures through a phone's video viewer or camera. AV is simply adding to the user's real-life experience.

On the other hand, Virtual reality takes these same features to a more advanced level by producing an entirely computer-generated simulation of an alternate world. These immersive simulations can create almost any visual or imaginable place for the player using special equipment such as computers, headsets, gloves, and sensors.